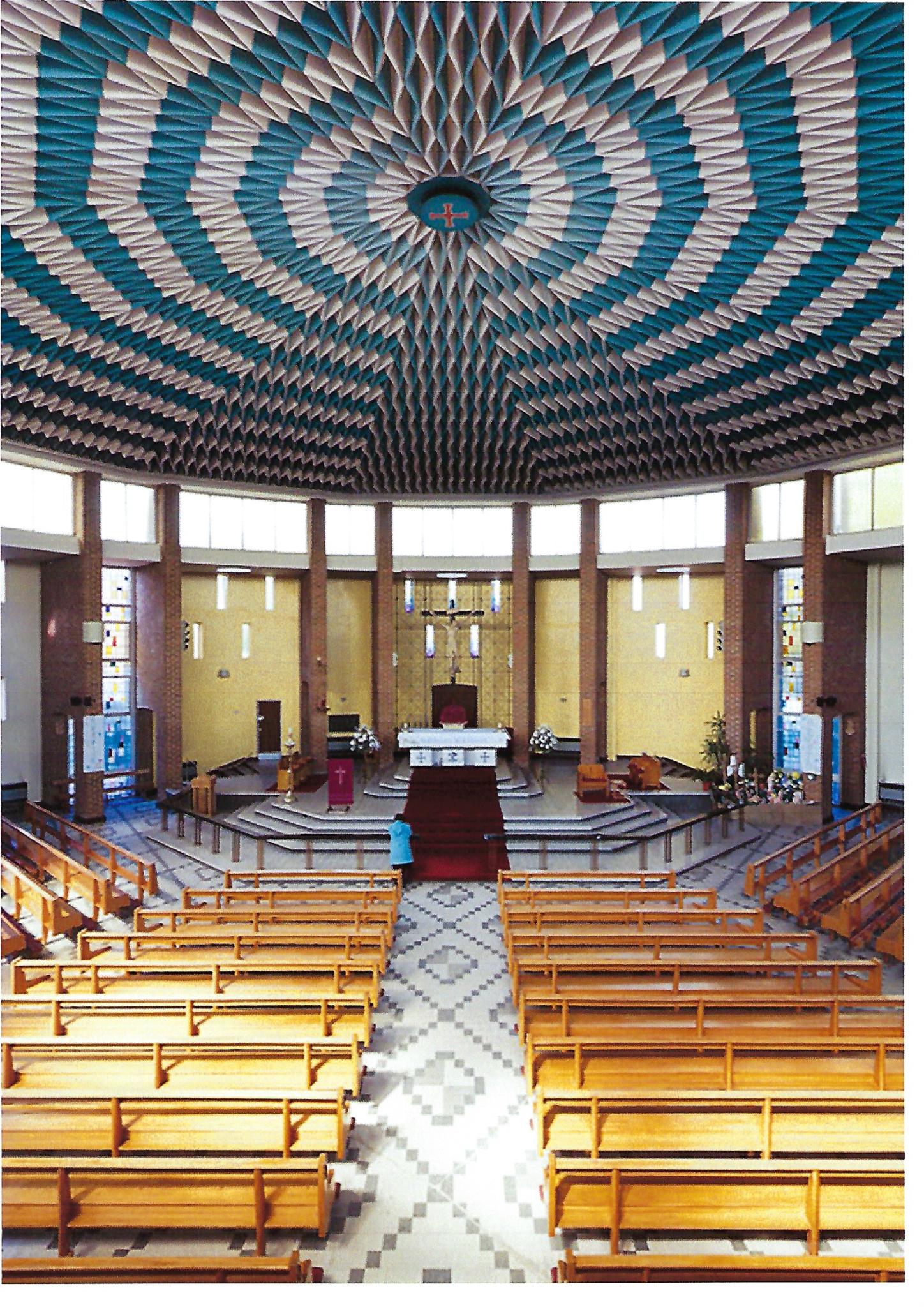 The Roman Catholic Church of St Mary, Dunstable, constructed 1962-1964 to the designs of Desmond Williams OBE and founder of Ellis Williams Architects is listed at Grade II.

Desmond Willliams, founder of Ellis Williams Architects in 1970, is an architect notable for his innovative church buildings at a time of great change in ecclesiastical architecture.

Roman Catholic Church of St Mary is an early example of the impact of the Liturgical Movement on church design and anticipated the reforms adopted in the Second Vatican Council. In the late-C19 and early-C20 the Roman Catholic Church in England was growing. That expansion entailed the construction of a large number of buildings serving the religious and social functions of the Catholic community.

Roman Catholic Church of St Mary, is circular in plan. The internal layout places the altar in front of the congregation, rather than at the centre as was the case at ground-breaking churches of the Liturgical Movement in church design (for example, Keith Murray and Robert Maguire’s Anglican church of St Paul, Bow Common, Grade II*, 1958-1960; or Frederick Gibberd’s design for the Metropolitan Cathedral of Christ the King in Liverpool, Grade I, 1962-1967). Desmond’s work was nevertheless at the forefront of new design and draws the congregation together around the altar, anticipating the emphasis on greater communality in worship that lay at the heart of the major reforms of the Second Vatican Council (particularly the 1963 Constitution on the Sacred Liturgy). The liturgical arrangement at Dunstable is very similar to some highly significant later churches, most notably the Roman Catholic Cathedral at Clifton (1969-1973, Grade II*).

Alongside the new church a contemporary presbytery and offices were constructed, and a later hut was built to the north of the church adjacent to a (2000) Garden of Remembrance. The church has not been heavily altered since its completion, though the baptistery has been re-purposed as a shop.

Interestingly, the practice is now working for the same Diocese, Northampton Diocese, currently finishing Northampton Cathedral Visitor Centre and in a lovely twist of fate Desmond’s son, Dominic Williams is the lead Director on this project.

Desmond Williams OBE, commented: “It was circular, with the object being to bring as many of the congregation near the altar, and proved very popular in attracting worshippers. The ceiling was inspired by my earlier visits to kings College Chapel in Cambridge”

Dominic Williams Director Ellis Williams commented: “Its great to see another one of Dad’s buildings being recognised with a listing, I really like his contemporary interpretation of an intricate fan vault detail rendered into two tone metal fins within the ceiling. ”

May 28, 2020 in News
This website uses cookies to improve your experience. We'll assume you're ok with this, but you can opt-out if you wish.Accept Learn more
Privacy Notice
Necessary Always Enabled